Download a PDF of this article
View archived releases

Former President Harry S. Truman once said “Give me a one-handed Economist. All my economists say, 'on one hand...', then 'but on the other...” He was referring to explanations he was receiving from his staff regarding various economic strategies. If this path was taken, then this event might happen but if it doesn’t, then this outcome could take place. Unfortunately, ambiguity is the nature of economics and forecasting. As long-term investors, we can’t be as indecisive as Truman’s economists. Our clients rely on us to weigh the prevalent risks, consider the probabilities, and allocate capital using our best judgement.

Inflation, and the resulting interest rate increases to subdue it, is an environment most investors haven’t seen in almost 40 years. During 2022, our client conversations revolved around the uncertainty of how long inflation would persist and its impact on the near-term economic outlook. It was a challenge to explain what was happening and why staying the course is often the best approach. Even the most stoic investors were questioning if they were in the right strategy and contemplating making changes to their long-term investment objectives.

To say it was a difficult year might be an understatement. However, the silver lining was a re-rating of valuations which has resulted in our expectations for future returns on a diversified stock and bond portfolio to look more pleasing today than it has in years. The outlook for bonds is much more attractive to us given higher starting interest rates and we have raised our return expectations for U.S. investment grade bonds and cash equivalents (Figure 8). However, the economic climate remains uncertain, and we expect stock markets to remain volatile in the near term. As a result, we are taking a more neutral stance between stocks and bonds with a slight preference for stocks within multi asset portfolios.

Global markets had a tough time in 2022 with most areas posting a negative return with international declines exacerbated by the strong U.S. dollar. When the dollar increases in value versus other currencies, it reduces the returns of those international markets. The S&P 500 fell 18.1% on a total return basis, international developed markets fell 14.0% and emerging market stocks fell 20.1%. Bonds held up a bit better relatively. However, they still dropped 13% on the year.

The risks of a recession in 2023 have risen significantly as inflation and higher interest rates weigh on consumption and fixed investment. Headlines indicate a recession is close to a certainty within the next 18 months. Housing affordability has been eroded by higher mortgage rates and home prices, consumer expectations while having increased recently remain at low levels, and risks in employment figures are to the downside. Other leading indicators also point toward a rough patch ahead. This is true both here in the U.S. and globally. With all that has happened in ’22, here are a few macro items to watch in ’23.

The Fed’s actions will be extremely important (if they weren’t already) moving forward. In March, the Federal Open Market Committee (FOMC) decided it was time to act and raise the target range for the federal funds rate to 0.25-0.50%. The movement of the Fed Funds Rate affects nearly everything, not only in the U.S. economy, but globally. Interest rates have risen dramatically outside of the U.S. as well, with Japan the only country left in the Group of 10 (G10) to still have a negative policy rate target (Figure 1). Based on a variety of factors, the Fed is likely nearing the end of the massive tightening cycle. Comments from some Fed presidents recently, however, have been more hawkish than expected. Expectations are that the Fed Funds rate will peak in June of next year. The chance of a soft landing has marginally increased with inflation beginning to cool. 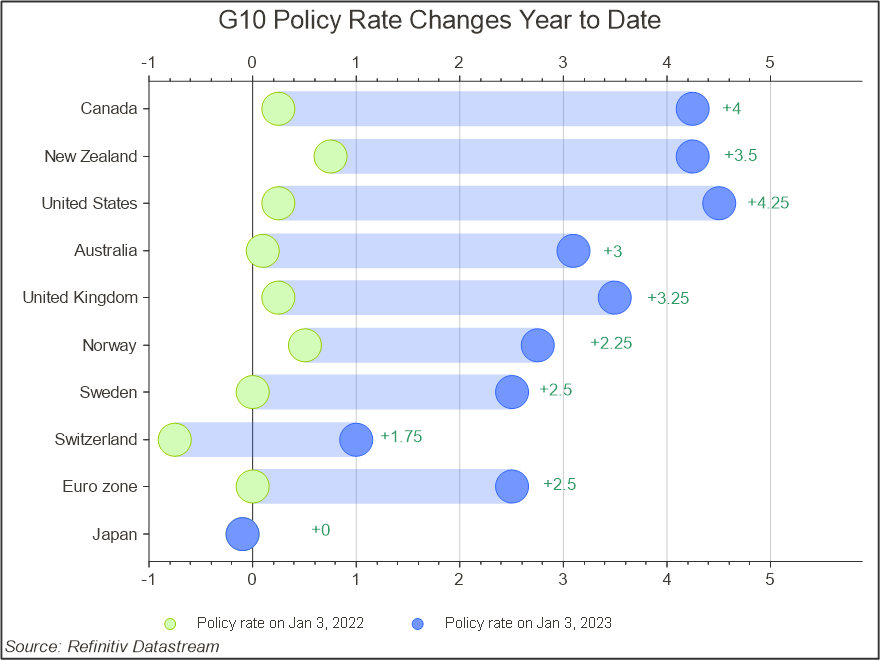 Consumers felt the impact of inflation in 2022 and will continue to feel those impacts in 2023. Retail sales in total have climbed, but much of this is due to inflation increasing the price of goods (Figure 2). Consumers remain healthy overall; however, they have been taking on more credit card debt over the past year to fund purchases and personal savings rates have fallen to 2.4%. Deposit balances remain north of pre-pandemic levels, however dwindling at a significant clip.

The health of the consumer will also be affected by the job market moving forward. With the unemployment rate at 3.7%, initial jobless claims trending in the low 200’s, and job openings lower but still above the 10 million mark, the job market remains tight. This has led to wage growth of 5.1% over the past year. Absent a continued loosening of the labor market, continued wage growth at this pace could make its way into inflation keeping it higher for longer. 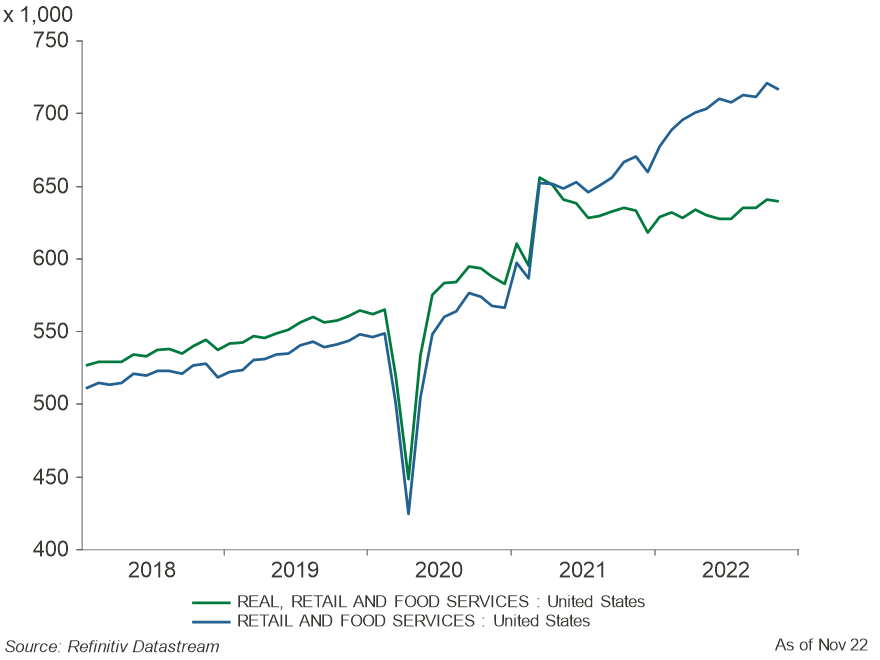 It has taken much longer than initially expected for supply chains to begin clearing up, but we are on the way. Supply chains are coming back into order, but not quite fully there. There is more visibility now than there has been in the recent past. The Global Supply Chain Pressure Index (GSCPI) has come off its highs experienced at the end of 2021 and into the beginning of 2022 (Figure 3). While this is a positive development, there is still some improvement to be had to get back to pre-pandemic levels. Additional improvement in this area should help with the supply and demand balance, and, ultimately, inflation.

There is quite a bit of economic uncertainty moving forward. Will a recession happen in 2023? When in 2023 will it begin/end? Will the Fed be able to bring inflation down to more acceptable levels and will they be able engineer a soft landing? A now split congress could drive political gridlock and a lack of major policy changes, reducing the degree of change which can be reassuring for many investors that at least there likely will not be any sweeping policy changes.

Despite retesting their 2022 lows in mid-October, the S&P 500 ended up higher for the quarter after 3 months of choppy trading. This put an end to the worst year for the benchmark’s performance since 2008. While fortunately we are not battling the same liquidity crisis in the markets like we were in 2008, current economic conditions point to a wide range of potential outcomes (both positive and negative), making the ability to forecast what ultimately happens to stocks within this environment more challenging.

While it remains to be seen if, and when, we get an economic recession, we do believe we will see an earnings recession in 2023.  An earnings recession is when we see consecutive quarter corporate declines over two consecutive quarters versus the prior year’s earnings. Higher interest rates and inflation can put pressure on both consumers and the companies they buy goods and services from.

We believe the tremendous growth in the money supply in 2020 and 2021 sped up corporate earnings growth to some degree (Figure 4). We expect this trend to normalize as money supply growth slows, which would suggest slowing earnings relative to those we have seen in recent years. Further, as prices and borrowing costs rise, consumers are now able to buy fewer goods per dollar spent and greater borrowing costs put pressure on personal balance sheets. These factors could all impair consumption further and in turn corporate earnings.

Corporations may face difficulties maintaining sales levels if consumer spending slows. This impairs their ability to pass on higher prices if inflation persists as they face increased costs of inventories and higher employee wages, which are often stickier (harder to change). These are conditions that put further pressures on company margins (how much they earn per dollar of sales) and ultimately their earnings growth. 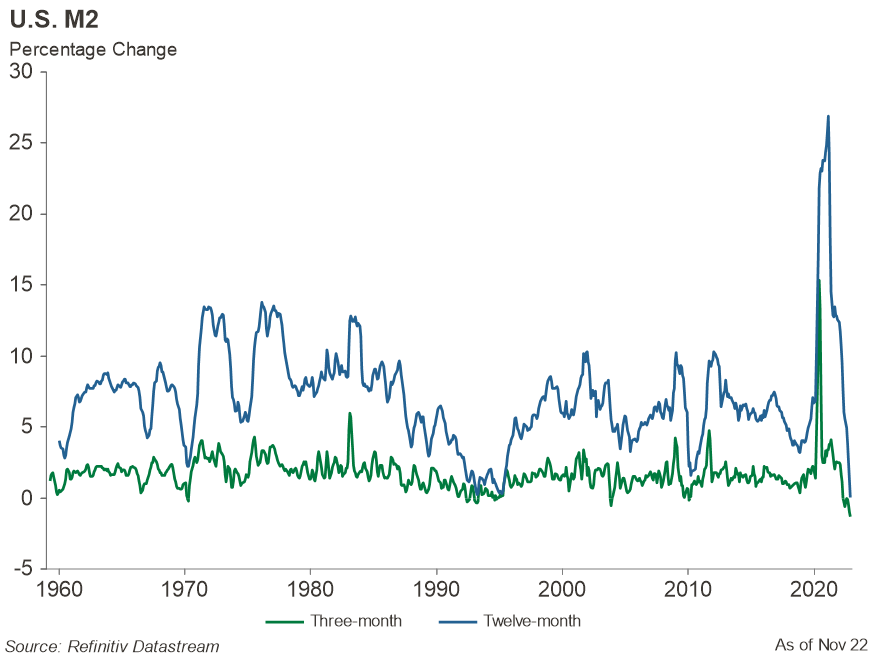 The link between corporate earnings and consumption is important because long term earnings trends correlate very closely to real GDP Growth, and private consumption makes up over 68% of real GDP as of Q3 2022 (Figure 5). If the economy slows more than expectations, it could create additional downward bias on corporate earnings forecasts, however, if we see inflation start to slow and the economy grows, it could lead to upside for earnings. 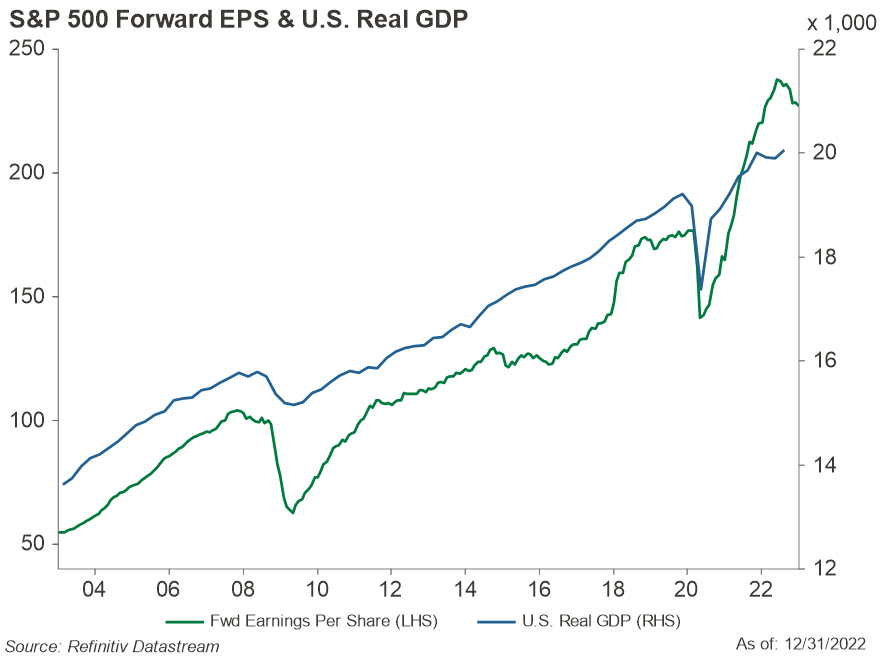 In this environment we prefer high quality companies that have strong balance sheets that may better weather a potential slowdown in earnings. This gives us preference towards large market capitalization stocks relative to small and mid-sized companies. We also remain neutral to international stocks versus domestic despite international stock outperformance for the year, while understanding that if we see the weakening dollar trend continue, or improving geopolitical conditions, it could lead to continued outperformance. Because the opportunities and risks in international stocks can turn quickly and unpredictably, we believe geographical diversification provided from holding international stocks in most market cycles makes sense.

In uncertain stock market environments, we believe it is important to make risk management our priority and ensure portfolios are positioned for the wide range of potential outcomes, while also keeping ourselves grounded with our long-term forecasts. In our view, based on a murkier outlook for stocks and a more constructive environment for bonds, we believe it makes sense to reduce stocks overall in multi-asset portfolios, but still maintain a slight bias in favor of stocks versus bonds based on our long-term forecasts.

The Federal Reserve’s actions during the year led to higher interest rates in the U.S. and resulted in a significantly inverted yield curve (Figure 6). The inverted curve is likely signaling the bond market believes the Fed will get inflation under control by pricing in lower rates over the long term. 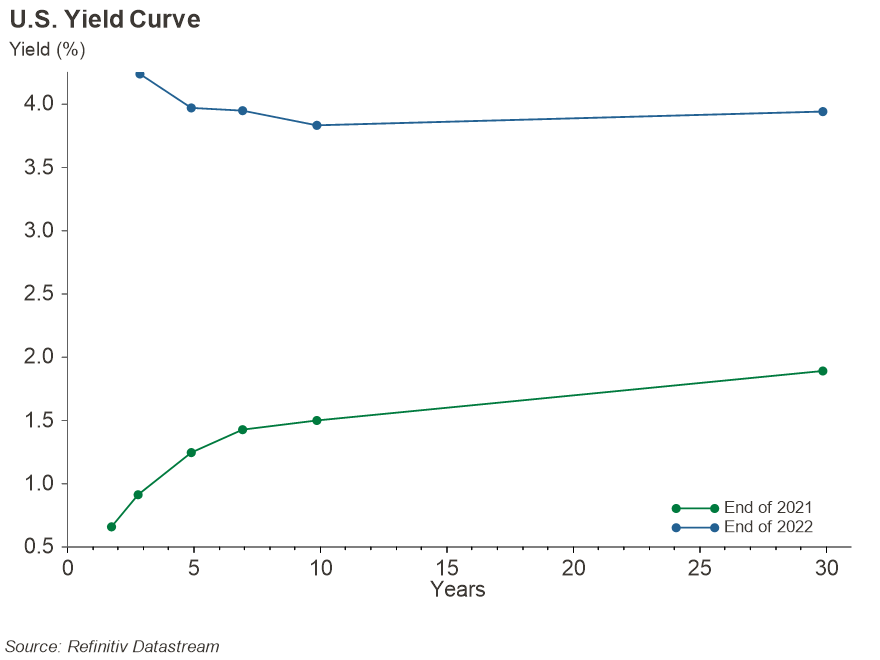 Despite the yield curve signaling a recession, investment grade corporate bond spreads, or the difference in the yield of two bonds with the same maturity, but different credit quality remain stable. If a recession were expected to occur, one would expect these spreads to reflect this risk. So far, they have not widened, showing investment grade bond credit fundamentals are strong. We feel it makes sense to begin reducing the allocation to riskier nontraditional income sectors within bond portfolios in favor of higher quality investment grade bonds. We are also positioning bond portfolios with a neutral duration to our benchmark as we believe long-term rates are closer to peaking this cycle.

For the longer maturity bond investments our clients own today, the price decline due to higher interest rates has been significant. On the bright side, the income earned on these bonds, and recovery in price from holding the bond to maturity, can result in total returns equivalent to interest rates paid on new bonds issued today. Many clients are wondering why we are investing in longer term bonds. A yield curve inversion can be short lived. If we enter a recession, interest rates could stabilize or fall, causing the yield curve to steepen. If that scenario would occur, longer term bonds would have higher total returns.

We believe the difficult year in fixed income markets has created some compelling opportunities for investment grade bond investors. We believe most of the Fed’s interest rate hikes are behind us, creating a more favorable backdrop for bond investing. Higher interest rates result in bonds producing more income, making it less likely we see another drawdown in total returns like we saw in 2022. Our research shows long-term returns in fixed income are highly correlated to the investor’s starting yield (Figure 7). 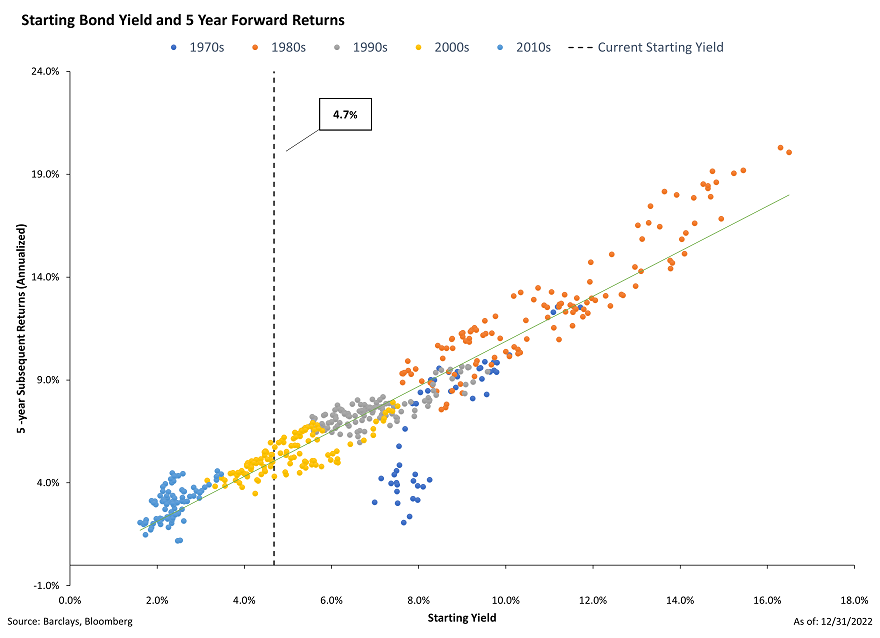 While the economic environment seems uncertain today, we don’t believe this should create anxiety for the long-term investor. As any economist, one handed or otherwise, will tell you, there is always unpredictability with their outlook. Despite the anxiety this past year presented, it made sense to stay invested through the challenging times and focus on factors within your control. An updated financial plan and a disciplined investment strategy can help provide clarity for investors in 2023 and beyond. 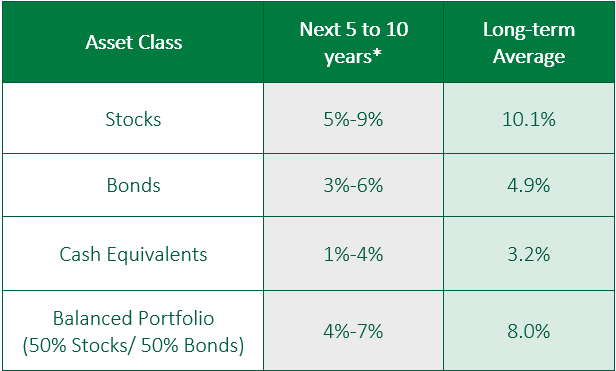 Looking for help navigating your future?

Set up a meeting with your local rep to review your current policies and make sure they're up to date. We pulled together some less obvious reasons to adjust your coverage.